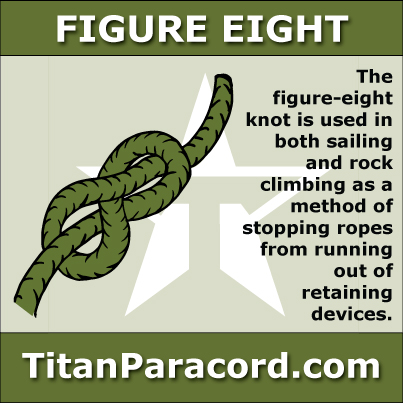 The Figure Eight Knot is a very important knot used in both sailing and rock climbing as a method of stopping ropes from running out of retaining devices. Like the overhand knot, which will jam under strain, often requiring the rope to be cut, the figure of eight will also jam, but is usually more easily undone than the overhand knot.
BUY TITAN PARACORD ON AMAZON.COM!

Figure-Eight Loop
The figure-eight loop is used like an overhand loop knot. This type of knot can be used in prusik climbing when used in conjunction with a climbing harness, a climbing rope, and locking carabiner designed for climbing, to ascend or descend with minimal equipment and effort.

Figure-Eight Bend
The figure-eight bend knot is used to “splice” together two ropes, not necessarily of equal diameter. This knot is tied starting with a loose figure-eight knot on one rope (the larger-diameter one if unequal), and threading of the other rope’s running end through the first figure eight, starting at the first figure-eight’s running end and paralleling the path of the first rope through the figure eight until the second’s ropes running end lies parallel against first’s standing end. The result is two figure-eight knots, each partly inside the other and tightening its hold on the other when they are pulled in opposite directions. This can be a permanent or temporary splice. While it precludes the ropes’ slipping relative to each other, it is a typical knot in having less strength than the straight ropes. In heraldry, this knot is known as Savoy knot.

Offset Figure-Eight Bend
The offset figure-eight bend is a poor knot that has been implicated in the deaths of several rock climbers.