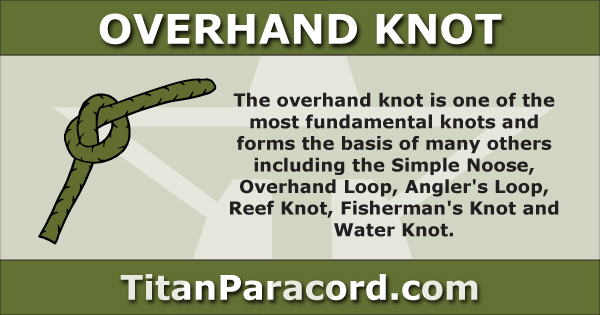 The Overhand Knot is one of the most fundamental knots and forms the basis of many others including the simple noose, overhand loop, angler’s loop, reef knot, fisherman’s knot and water knot. The overhand knot is very secure, to the point of jamming badly. It should be used if the knot is intended to be permanent. It is often used to prevent the end of a rope from unraveling.

There are a number of ways to tie the Overhand knot.

In heraldry, the overhand knot is known as a “Stafford knot”, due to use first as a heraldic badge by the “Lords of Stafford”, then as a general symbol of Staffordshire.

If the two loose ends of the knot are joined together (without creating additional crossings), this becomes equivalent to the trefoil knot of mathematical knot theory