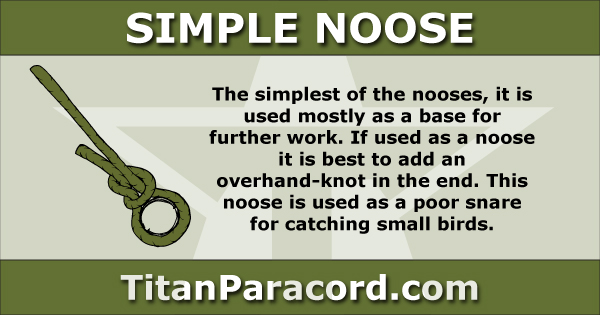 The Simple Noose is the simplest of the nooses, and used mostly as a base for further work.  It is a close relative of the overhand-knot and the Marline Hitch or Single Hitch.  If used as a noose it is best to add an overhand-knot in the end. This noose can also be used as a “poor-man’s” snare for catching small birds.

The Simple Noose (ABOK # 1114, p 204.) is identical in structure to the Slip Knot except that the bight to be inserted is not formed from the short end, but rather the long end. It has been used as a snare to catch small animals. It is important to understand that this knot is different that the Hangman’s Knot.

It is a frequently tied knot – being used in the Arbor Knot and in knitting as the first loop when casting on – where it is frequently tied as a Noose and called a Slip Knot. It has many other uses including gaining initial control of the string when tying up a package.

The Hangman’s Knot is related to the simple Noose except that many turns are wrapped around the loop. Its supposed advantage for hanging was humanitarian: appropriate use was intended to result in a broken neck – causing a rapid death.