FREE DOMESTIC SHIPPING IN THE USA! 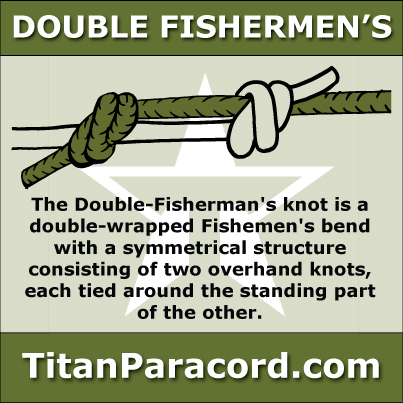 The Double Fishermen’s Knot or grapevine knot is a bend, or a knot used to join two lengths of rope. This knot and the triple fisherman’s knot are the variations used most often in climbing, arboriculture, and search and rescue. The knot is formed by tying a double overhand knot, in its strangle knot form, with each end around the opposite line’s standing part.
BUY TITAN PARACORD ON AMAZON.COM!

A primary use of this knot is to form high strength loops of cord for connecting pieces of a climber’s protection system. Another common use for this knot is to back up a critical knot, such as a harness tie-in knot or single-line rappel rigs. In this use, the running end is tied around the standing end of the rope, so that it cannot slip back through the knot.

Other Uses of the Double Fishermen’s Knot

This knot, along with the basic fisherman’s knot can be used to join the ends of a necklace cord. The two double overhand knots are left separated, and in this way the length of the necklace can be adjusted without breaking or untying the strand.