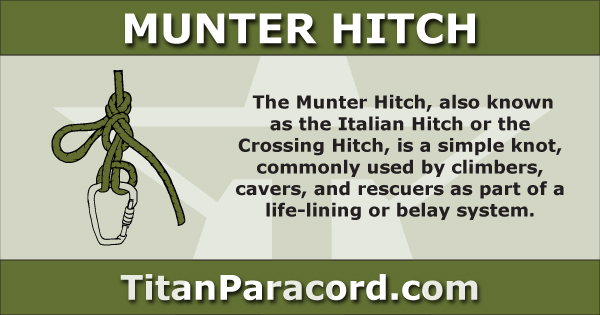 The Munter Hitch (aka Italian Hitch or Crossing Hitch) is a simple knot, commonly used by climbers, cavers, and rescuers as part of a life-lining or belay system. To climbers, this knot is also known as HMS, the abbreviation for the German term Halbmastwurfsicherung, meaning half clove hitch belay. This technique can be used with a special “pear-shaped” HMS locking carabiner, or any locking carabiner wide enough to take two turns of the rope. The Munter hitch is named after a Swiss mountain guide, Werner Munter, who popularised its use in mountaineering.

The hitch is simply a set of wraps using a rope or cord around an object, generally a round object like a pipe, pole or more commonly, a carabiner. Its main use is as a friction device for controlling the rate of descent in belay systems.

How to Use the Munter Hitch

The Munter hitch creates friction by having the rope rub on itself and on the object it has been wrapped around. There is no static friction (localised abrasion) on any part of the rope as it is a continuously moving knot. One very useful aspect of the Munter is its reversibility; it can be pulled from either side of the rope and it still works just as effectively.

Using the Munter Hitch as a Load Releasable Tie-Off

As with most belay devices and some hitches the Munter can be tied off (dogged/dogged off) to maintain tension in a manner which is easily released under tension, this is often referred to as a Munter-Mule or MMO (Munter Mule Overhand).

Examples of when a Munter Hitch tie-off would be employed include:

When a belayer needs to transfer the load from his harness to the anchor to escape the system: a rope grab (mechanical or friction knot/Prusik) is placed on the load line towards the load, rope is terminated on the rope grab (or the tails of accessory cord are used when using a cordelette with a Prusik as a rope grab) and runs back to the anchor where a Munter mule is tied under tension. The load can then be lowered (transferred) from the original belay onto the Munter Mule via the rope grab. The new line is often consider independent of the safety system so the original belay needs to be maintained throughout the process and secured back to the anchor before the system can be left unattended.

Using the Munter Hitch in a Belay System

A belay system incorporating the Munter Hitch is the same as any other belay system, which incorporates a belayer to tend the rope and an anchor, which secures the belay system and belayer.

There are several advantages to the Munter Hitch. It requires no additional hardware other than a carabiner. It’s also the most common belay system which locks with the brake hand in line with the load, and as such is a more suitable method for direct belays than using a normal belay plate. This can be useful when the anchor, carabiner and Munter hitch are above or behind the belayer whilst attention is paid to the loaded end of the rope. It can also more effectively dissipate heat than a belay device because no two surfaces of the rope are in contact with each other for more than an instant.

However, it places more bends in a rope than other belay methods, and creates significantly more friction on the outer sheath. Another disadvantage is that it can introduce significant twists to the rope. It is a versatile knot to know and can be used for full rope length vertical descents without the need for gloves.
The friction of the rope against the screw on their carabiner can cause the screw to undo and the carabiner to open, potentially weakening the strength of the carabiner, or allowing the rope to escape the carabiner completely.