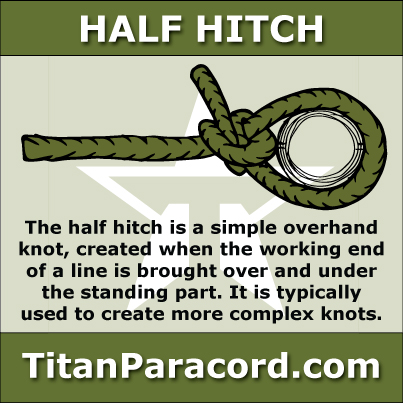 The Half Hitch is a simple overhand knot, where the working end of a line is brought over and under the standing part. Insecure on its own, it is a valuable component of a wide variety of useful and reliable hitches, bends, and knots. Two successive half hitches tied around an object makes up the common clove hitch. Two successive half hitches tied around the standing part a rope is known as two-half-hitches or double half hitch.
BUY TITAN PARACORD ON AMAZON.COM!

Tying a Half Hitch

One instance where a half hitch stands on its own without additional embellishment is when added to a timber hitch to help stabilize a load in the direction of pull. A timber hitch is tied on the far end of the load to bind it securely and a half hitch made at the forward end to serve as a guide for the rope. In this instance, the half hitch combined with a timber hitch is known as a killick hitch or kelleg hitch.

The knot is attractive to the eye and so is used decoratively for French whipping which is also known as half hitch whipping.

Although two Half Hitches do make a complete “Hitch”, it is better to begin by first passing the rope around the post or bollard a second time to make the Round Turn and Two Half Hitches. This is more secure and provides easier control of the load while tying the Half Hitches.

The post Half Hitch appeared first on Titan Paracord.