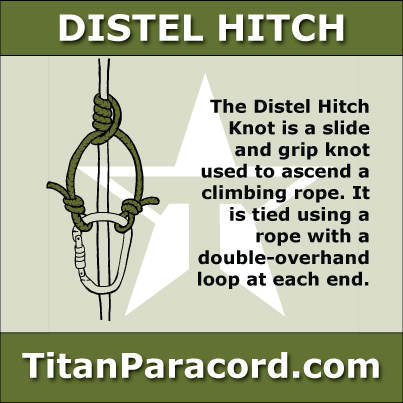 The Distel Hitch is a friction hitch knot used to attach a carabiner to a rope, allowing a climber to descend or ascend. The knot is similar to the prusik knot, however it grips the rope more consistently, making for increased climber control.
BUY TITAN PARACORD ON AMAZON.COM!

The Distel Hitch is a slide and grip knot used to ascend a climbing rope. It is tied using a lanyard with a loop in each end. Although any safe loop would be acceptable, each loop is usually secured with a Double Overhand around the lanyard.

The Distel itself is based on a Clove Hitch but the “top” part of the hitch includes additional turns that form the spiral of rope responsible for gripping the main rope. The Distel is designed for tension in only one direction, which makes it especially suitable for use in climbing, e.g., by arborists.

1) Make four wraps around main static rope with a hand tied or sewn prusik or spliced eye split tail friction cord.
2) After fourth wrap bring wrapping tail down and make an additional wrap at bottom of other wraps in same direction while tying a half hitch by tucking tail under itself in the front of the knot.
3) Join eyes in front and clip together with a carabiner.

This knot is a popular hitch to work along with a micro pulley which will tend the slack as the tail of the climbing rope is pulled.