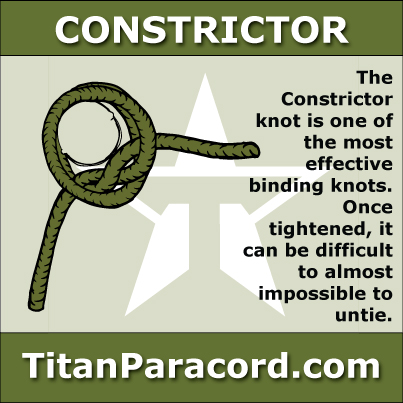 The Constrictor Knot is one of the most effective binding knots. Simple and secure, it is a harsh knot that can be difficult or impossible to untie once tightened. It is made similarly to a clove hitch but with one end passed under the other, forming an overhand knot under a riding turn. The double constrictor knot is an even more robust variation that features two riding turns.
BUY TITAN PARACORD ON AMAZON.COM!

The History of the Constrictor Knot

First called “constrictor knot” in Clifford Ashley’s 1944 work The Ashley Book of Knots, this knot likely dates back much further. Although Ashley seemed to imply that he had invented the constrictor knot over 25 years before publishing The Ashley Book of Knots, research indicates that he was not its originator. Ashley’s publication of the knot did bring it to wider attention.

Although the description is not entirely without ambiguity, the constrictor knot is thought to have appeared under the name “gunner’s knot” in the 1866 work The Book of Knots, written under the pseudonym Tom Bowling. In relation to the clove hitch, which he illustrated and called the “builder’s knot”. He wrote, “The Gunner’s knot (of which we do not give a diagram) only differs from the builder’s knot, by the ends of the cords being simply knotted before being brought from under the loop which crosses them.” Oddly, when J. T. Burgess copied from Bowling, he changed this text to merely state “when the ends are knotted, the builder’s knot becomes the gunner’s Knot.” Although this clove hitch with knotted ends is a workable binding knot, Burgess was not actually describing the constrictor knot. In 1917, A. Hyatt Verrill illustrated Burgess’ clove hitch variation in Knots, Splices and Rope Work.

The constrictor knot was clearly described but not pictured as the “timmerknut” (“timber knot”) in the 1916 Swedish book Om Knutar (“On Knots”) by Hjalmar Öhrvall. Finnish scout leader Martta Ropponen presented the knot in her 1931 scouting handbook Solmukirja (“Knot Book”), the first published work known to contain an illustration of the constrictor knot. Cyrus L. Day relates that, “she had never seen it in Finland, she wrote to me in 1954, but had learned about it from a Spaniard named Raphael Gaston, who called it a whip knot, and told her it was used in the mountains of Spain by muleteers and herdsmen.” The Finnish name “ruoskasolmu” (“whip knot”) was a translation from Esperanto, the language Ropponen used to correspond with Gaston.

The method shown below is the most basic way to tie the knot. There are also at least three methods to tie the constrictor knot in the bight and slip it over the end of an object to be bound.