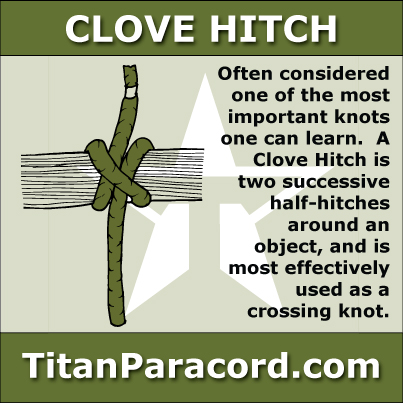 The Clove Hitch is a type of knot. Along with the bowline and the sheet bend, it is often considered one of the most important knots and is commonly referred to as a Double Hitch. A clove hitch is two successive half-hitches around an object. It is most effectively used as a crossing knot. It can be used as a binding knot, but is not particularly secure in that role. A clove hitch made around the rope’s own standing part is known as either two half-hitches or buntline hitch, depending on whether the turns of the clove hitch progress away from or towards the hitched object.

This knot is particularly useful where the length of the running end needs to be adjustable, since feeding in rope from either direction will loosen the knot to be tightened at a new position. With certain types of cord, the clove hitch can slip when loaded. In modern climbing rope, the clove hitch will slip to a point, and then stop slipping. With smaller diameter cords, after being heavily weighted it may become difficult to untie. It is also unreliable when used on a square or rectangular post, rather than round.