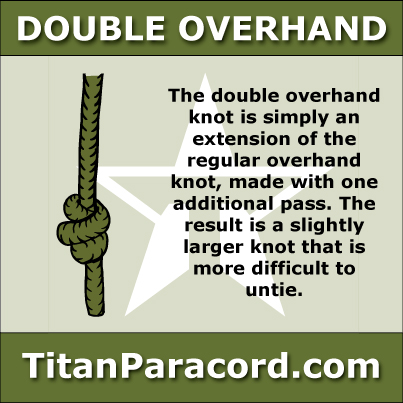 The Double Overhand Knot is simply a logical extension of the regular overhand knot, made with one additional pass. The result is slightly larger and more difficult to untie. It forms the first part of the surgeon’s knot and both sides of a double fisherman’s knot. The strangle knot is a rearranged double overhand knot made around an object. It is sometimes used to secure items to posts.
BUY TITAN PARACORD ON AMAZON.COM!

Uses for the Double Overhand Knot

The Double Overhand Knot is based on the Overhand Knot with an additional turn. It creates a reliable, moderately large, stopper knot but can also be used to increase the security of another knot, such as the Bowline Knot.