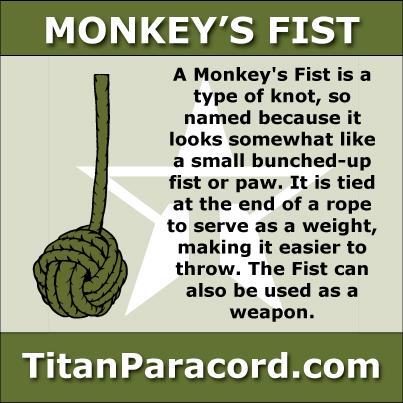 The Monkey’s Fist, or monkey’s paw, is a type of knot, so named because it looks somewhat like a small bunched fist/paw. It is tied at the end of a rope to serve as a weight, making it easier to throw, and also as an ornamental knot. This type of weighted rope can be used as a hand-to-hand weapon, called a slungshot by sailors. It was also used in the past as an anchor in rock climbing, by stuffing it into a crack. Nowadays it is still sometimes used in sandstone.
BUY TITAN PARACORD ON AMAZON.COM!

A Description of the Monkey’s Fist

The knot is usually tied around a small weight, such as a stone, marble, tight fold of paper, or a piece of wood. A thicker line will require a larger object in the centre to hold the shape of the knot. Another variation of the monkey’s fist knot omits the use of an internal object as a weight and rather uses the spare end which gets tucked back into the knot. This results in a nicer looking knot of a lesser weight, minimizing the potential danger of hurting someone with the knot when hauling line.

Other Uses for the Monkey’s Fist