FREE SHIPPING IN THE USA - NO MINIMUM PURCHASE!

Our patented Survival Paracord - Designed for the battlefield, and now available to you... 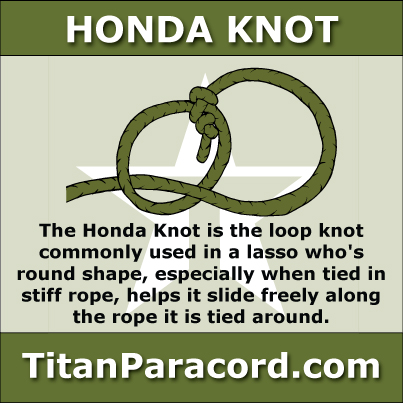 The Honda Knot is the loop knot most commonly used in a lasso. Its round shape, especially when tied in stiff rope, helps it slide freely along the rope it is tied around. To tie, first place an overhand knot in the end of the rope. Then tie a second overhand knot, pass the running end of the rope through it, and tighten.
BUY TITAN PARACORD ON AMAZON.COM!

More Info About the Honda Knot

Like a Honda Knot, a Lariat Loop is similarly constructed but will not slip from the running end, so is recommended. To tie a Lariat Loop: first tie an overhand knot, then pinch it so that the running end slides freely back and forth. Pass the rope end through just that “free-sliding” loop, and tighten. The photograph at right displays a Lariat Loop, with an additional overhand knot acting as a stopper knot because the lariat loop can slip by way of the rope’s end when tension is not applied to the running end. It can be quickly adjusted, but does not function exactly the same as a lasso knot, which makes it arguably safer.

[blogslidersmall][content]The Overhand Knot is one of the most fundamental knots and forms the basis of many others including the simple noose, overhand loop, angler’s loop, reef knot, fisherman’s knot and water knot. The overhand knot is very secure, to the point of jamming badly. It should be used if the knot is intended to be permanent. It is often used to prevent the end of a rope from unraveling.[/content][/blogslidersmall]
Read more

[blogslidersmall][content]The Simple Noose is the simplest of the nooses, and used mostly as a base for further work.  It is a close relative of the overhand-knot and the Marline Hitch or Single Hitch.  If used as a noose it is best to add an overhand-knot in the end. This noose can also be used as a “poor-man’s” snare for catching small birds.[/content][/blogslidersmall]
Read more

[blogslidersmall][content]The Munter Hitch (aka Italian Hitch or Crossing Hitch) is a simple knot, commonly used by climbers, cavers, and rescuers as part of a life-lining or belay system. To climbers, this knot is also known as HMS, the abbreviation for the German term Halbmastwurfsicherung, meaning half clove hitch belay. This technique can be used with a special “pear-shaped” HMS locking carabiner, or any locking carabiner wide enough to take two turns of the rope.[/content][/blogslidersmall]
Read more