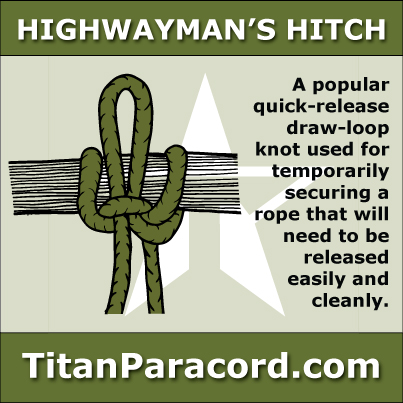 The Highwayman’s Hitch is a quick-release draw loop knot used for temporarily securing a rope that will need to be released easily and cleanly. The hitch can be untied with a tug of the working end. The line does not need to be pulled from around the object.
BUY TITAN PARACORD ON AMAZON.COM!

The History of the Highwayman’s Hitch

The hitch was called the highwayman’s cutaway in 1947 by Cyrus L. Day. He related that, according to Hal McKail, the knot was attributable to the notorious 18th century English highwayman Dick Turpin. Day’s book, however, suggested it for use as a quick-release mooring hitch for solo sailing.

While the knot is alleged to have actually been used by highwaymen, this claim is rejected by knot expert Geoffrey Budworth who stated, “there is no evidence to substantiate the reputation of the highwayman’s hitch as a quick-getaway-knot for robbers on horseback.”

Until the knot is tightened and properly dressed the highwayman’s hitch has little holding power. The treacherous problem with this knot is that the bight that nips the slip-tuck (last-formed bight, which is pulled for release) presses it against the rope and the hitched object, and does so with great force, as it is the bight in the (fully loaded) standing part; especially with relatively larger diameter objects vis-a-vis rope diameter, the rope pulls away from the object such that it is possible –all too easily, in some circumstances– for the nipping bight to collapse the toggle bight and pull it the “frame” against which it should be pressed. Therefore, alternatives to this dangerous hitch were devised such that this problem was avoided (or at least mitigated).

In his 2004 book, Outdoor Knots (pub. Mountaineers), Clyde Soles presents one of Dan Lehman’s revisions to this treacherous knot that is simple and effective, naming it the “slip-free hitch”. One simply rearranges the trio of bights so that the heavily loaded bight in the standing part will surround, rather than go through, the next-made bight; the finishing slipped-tuck bight will thus go through the 2nd-made bight, and so be less severely loaded. As the frame against which this rope toggle is nipped is entirely parts of the knot (and not depending upon proximity to the hitched object), this revision avoids the capsizing vulnerability of the highwayman’s hitch.
The Notable Knot Index recommends the tumble hitch as a more stable hitch. It’s a similar hitch, but less prone to capsizing.