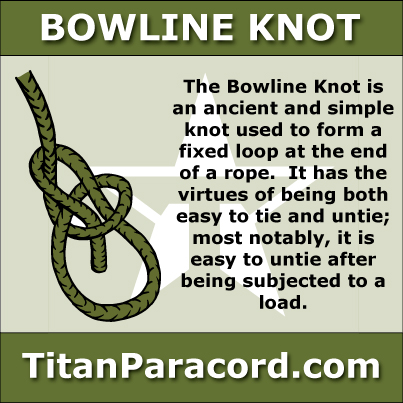 The Bowline Knot is an ancient and simple knot used to form a fixed loop at the end of a rope. It has the virtues of being both easy to tie and untie; most notably, it is easy to untie after being subjected to a load. The bowline is sometimes referred as King of the knots because of its importance. It is one of the four basic maritime knots (the other three are figure-eight knot, reef knot and clove hitch).
BUY TITAN PARACORD ON AMAZON.COM!

More About the Bowline Knot

Although generally considered a reliable knot, its main deficiencies are a tendency to work loose when not under load, to slip when pulled sideways and the bight portion of the knot to capsize in certain circumstances. To address these shortcomings, a number of more secure variations of the bowline have been developed for use in safety-critical applications.

The History of the Bowline Knot

The bowline’s name has an earlier meaning, dating to the age of sail. On a square-rigged ship, a bowline is a rope that holds the edge of a square sail towards the bow of the ship and into the wind, preventing it from being taken aback. A ship is said to be on a “taut bowline” when these lines are made as taut as possible in order to sail close-hauled to the wind.

The bowline knot is thought to have been first mentioned in John Smith’s 1691 work A Sea Grammar under the name Boling knot. Smith considered the knot to be strong and secure, saying, “The Boling knot is also so firmly made and fastened by the bridles into the cringles of the sails, they will break, or the sail split before it will slip.”

Another possible finding was discovered on the rigging of the Ancient Egyptian Pharaoh Khufu’s solar ship during an excavation in 1954.

The bowline is used to make a loop at one end of a line. It is tied with the rope’s working end also known as the “tail” or “end”. The loop may pass around or through an object during the making of the knot. The knot tightens when loaded at (pulled by) the standing part of the line.

The bowline is commonly used in sailing small craft, for example to fasten a halyard to the head of a sail or to tie a jib sheet to a clew of a jib. The bowline is well known as a rescue knot for such purposes as rescuing people who might have fallen down a hole, or off a cliff onto a ledge. They would put it around themselves and sit on the loop. This makes it easy to heft them up away from danger. The Federal Aviation Administration recommends the bowline knot for tying down light aircraft.

A rope with a bowline retains approximately 2/3 of its strength, with variances depending upon the nature of the rope, as in practice the exact strength depends on a variety of factors.

A mnemonic used to teach the tying of the bowline is to imagine the end of the rope as a rabbit, and where the knot will begin on the standing part, a tree trunk. First a loop is made near the end of the rope, which will act as the rabbit’s hole. Then the “rabbit” comes up the hole, goes round the tree right to left, then back down the hole. This can be taught to children with the rhyme: “Up through the rabbit hole, round the big tree; down through the rabbit hole and off goes he.”