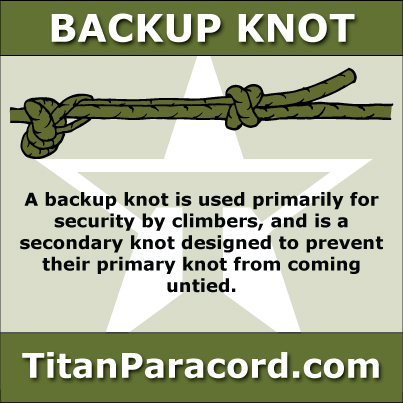 The Backup Knot (also called a stopper knot) is used primarily for security by climbers, and is a secondary knot designed to prevent their primary knot from coming untied.  This knot is usually tied about 12 – 18 inches after the primary knot.
BUY TITAN PARACORD ON AMAZON.COM!

To tie a simple one-sided double-fisherman’s knot as a Backup Knot, do the following:  Take your rope and wrap the free end twice around the main rope and the working part of the free end, working back toward the primary knot.  Feed the free end back through the loops that you just created.  Pull the free end so that the backup knot tightens down onto the standing line.  And that’s it, a perfect Backup Knot!

Around the Standing Part

When a stopper knot is tied outside another knot and around the standing part it can also be called a backup knot. Tying the end around the standing part helps prevent the knot from unraveling by not allowing the end to slide back into the knot. Examples of this usage are often seen in climbing, rope rescue, and other safety-of-life situations. Common knots used for this purpose are:

Nautical Usage of the Backup Knot

In nautical settings, a stopper may refer to a length of rope that is belayed at one end with the other end attached to a tensioned line using a friction hitch in order to slacken a portion of the tensioned line. For example if a sheet becomes jammed on a winch while under sail, a “stopper” can be used to temporarily take the strain off the winch while the riding turn is cleared.