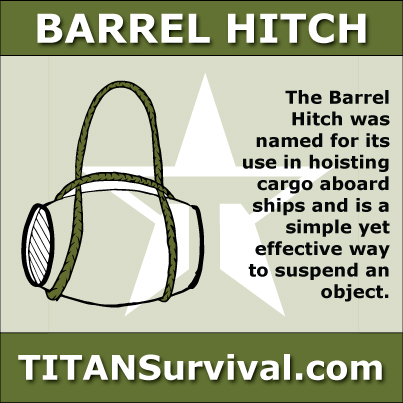 The Barrel Hitch and “barrel sling,” named for their use in hoisting cargo aboard ships, are a simple yet effective way to suspend an object. The barrel is laid on its side, both sides of the strop are spread out and passed underneath, the ends of the strop are raised together, one end is tucked through the other and hooked to an eyehook. The tightened knot looks like a cow hitch. A cow hitch and bowline can achieve the same effect and are called a “cow hitch hoist.”
BUY TITAN PARACORD ON AMAZON.COM!

The barrel hitch is made by tying an overhand knot, leaving plenty of free rope at the working end. Where the rope crosses itself in the middle of the knot (near the target), grab the strand of rope on top and bring it towards you, then lay it back down. The result should resemble stage 2: note where the target is.

Though the barrel hitch will keep an object upright even if the rope is made to swing, it is important to note that strong jerking movements while raising or lowering can easily dislodge the sling.