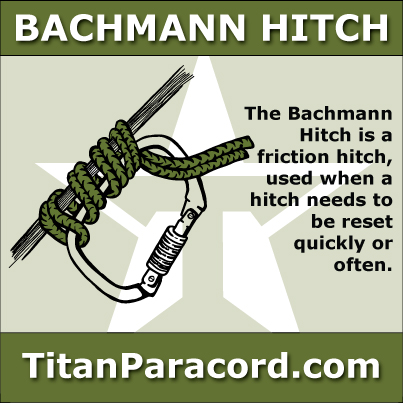 The Bachmann Hitch (sometimes misspelled ‘Bachman’) is a friction hitch. It is useful when the friction hitch needs to be reset quickly/often or made to be self-tending as in crevasse and self-rescue.
BUY TITAN PARACORD ON AMAZON.COM!

The Bachmann Hitch requires the use of a carabiner. It does not matter if the carabiner is locking or not. Most importantly, the carabiner must be of round cross section for friction. Grabbing hold of the carabiner will release the friction and allow the hitch to slide freely and thus be moved appropriately. To remove the Bachmann hitch, just unclip the top loop, hold onto the carabiner and pull the cord free.

This knot is frequently tied using a sling made from 1″ tubular webbing. In this case wrap the webbing 3 times around the rope (this means the carabiner gate must be opened 3 times in the tying of the knot) for normal (dry) applications. There are a limited number of applications that involve repeated shock loads to the knot and in these 4 wraps are usually sufficient.

However, with non-locking carabiner it is safer to use the knot with carabiner gate opening facing down (opposite to what is shown in the picture). This decreases the risk of self-unclipping: at maximum, one twist goes off. Otherwise, the whole knot may fail.