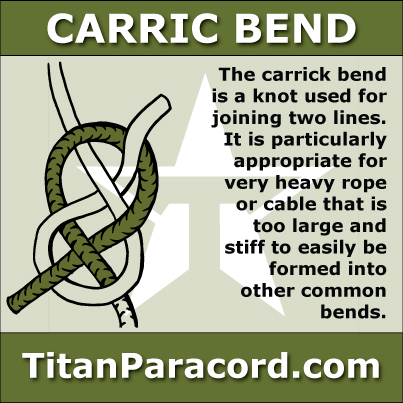 The Carrick Bend, also known as the Carric Bend, is a knot used for joining two lines. It is particularly appropriate for very heavy rope or cable that is too large and stiff to easily be formed into other common bends. It will not jam even after carrying a significant load or being soaked with water. As with many other members of the basket weave knot family, the carrick bend’s aesthetically pleasing interwoven and symmetrical shape has also made it popular for decorative purposes.

The Carrick Bend in Heraldry

In heraldry, this known as the “Wake knot” or “Ormonde knot”, due to being used as a heraldic badge of various families.

The Etymology of the Carrick Bend

This knot’s name dates back to at least 1783 when it was included in a nautical bilingual dictionary authored by Daniel Lescallier. Its origins prior to that are not known with certainty. There are several possible explanations for the name “Carrick” being associated with this bend. The Elizabethan era plasterwork of Ormonde Castle in Carrick-on-Suir shows numerous carrick bends molded in relief. Or the name may come from Carrick Roads — a large natural anchorage by Falmouth in Cornwall, England. The name may also have been derived from the Carrack, a medieval type of ship.

The eight crossings within the carrick bend allow for many similar looking knots to be made. The lines in a “full” or “true” carrick bend alternate between over and under at every crossing. There are also two ways the ends can emerge from the knot: diagonally opposed or from the same side. The latter form is also called the double coin knot. The form with the ends emerging diagonally opposed is considered more secure.

Unfortunately, with so many permutations, the carrick bend is prone to being tied incorrectly.