Our best cord for projects. 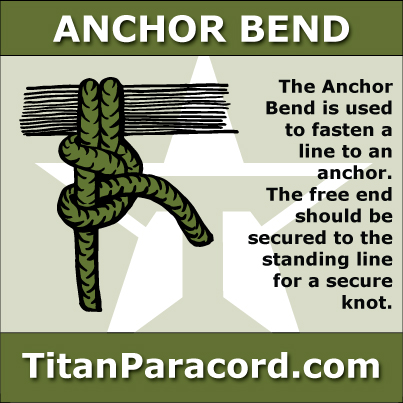 The Anchor Bend is a knot used for attaching a rope to a ring or similar termination point.  Its name originates from when “Bend” was understood to mean “tie to” or “attach to”, and not limited to knots that typically join ropes together. While the knot can become jammed in some modern materials, it is usually easily untied after moderate loads.
BUY TITAN PARACORD ON AMAZON.COM!

The Anchor Bend knot can be made more resistant to jamming by taking an extra turn around the object – this will make for a 1-diameter longer span of the end to reach around the standing part to be tucked (although in a case of tying to a small shackle or link of a chain, this might not be possible). The Anchor Bend is the approved knot for attaching anchors (or more generally anchor chains) to warps. The Anchor Bend Knot is very similar to a round turn and two half hitches except that the first half hitch is passed under the turn. In many everyday uses, the finishing half-hitch need not be made; alternatively, one might seek surer security by tying off the end with a Strangle knot to the standing part.  And that’s it, a perfect Anchor Bend Knot! The Barrel Hitch and “barrel sling,” named for their use in hoisting cargo aboard ships, are a simple yet effective way to suspend an object. The barrel is laid on its side, both sides of the strop are spread out and passed underneath, the ends of the strop are raised together, one end is tucked through the other and hooked to an eyehook.
Read more

[blogslidersmall][content]The Cleat Hitch is used to secure a rope to a cleat. It is a simple hitch, yet seems to boggle the minds of many visitors trying to secure their lines to your cleat. It is the best way to tie a boat to a dock and is a quick and easy method of tying a rope to a cleat on a dock or boat that is also easy to untie. Learn the Cleat Hitch if you own a boat or even if you don’t. It is amazing how many boat owners do not know this easy and essential boating knot. This knot ties and unties quickly and neatly. You will impress everyone if you tie this knot when handed a rope at the dock![/content][/blogslidersmall]
Read more